Alright so I’ve spent a couple weeks with the ADA Definition and have been playing with it along side the Thick Air - I havnt been using them together in the same rig to avoid redundancy but have been switching back and forth, trying them in different applications and in series with different pedals.
The ADA is a really cool pedal. It is a very high quality professionally designed piece of gear. It is basically a preamp type pedal - think Dunlop EP101 Echoplex - although I have never used the Echoplex I know that it has been widely cloned and is highly regarded as a “tone enhancer” type pedal.
The ADA puts a little bit of secret sauce on your tone by thickening or enhancing the original tone of your pickups. It does this automatically and without any adjustments available. It also includes a nice clean boost, making it quite versatile in where you can put it in the chain, however, for best results as a tone enhancer you want it first in chain so that your pickups interact with it straight away.
In some ways it is very similar to the Doozy Boost, which has a buffer/preamp bypass designed to enhance pedal steel guitars in addition to a nice boost - although the resulting tone from the Doozy Boost is brighter and rounder - I would describe the ADA as a little more transparent and thick without the added bright/wet tone of the Doozy Boost.
I found the ADA to be particularly useful with a Strat and single coil pickups. It makes the D Allen Voodoo 69s really come alive and almost puts them in the territory of split Super 2 like tone. However, when running the Dimarzios or humbucker a through it I found tone to be a little too much for Jerry style tones - although I could see how this could be useful for other styles, including blues etc.
The only downside of the ADA is that it is always in unless you reach down and bypass it with your finger - there is no way to bypass it or turn it off with your foot as the foot switch is just for operating the boost mode. Also, unlike the Thick Air it is not adjustable in terms of how much affect it is having on the tone.
This brings me to the comparison with the Thick Air. Both pedals contain JFET type preamp circuits. But the Thick Air has two of them and both of them are highly adjustable and you can blend both of them together for even more variety of tone shaping. Plus the Thick Air has a bright switch which also adds to the versatility.
At around half the cost of the Thick Air the ADA is a great option for those looking to add thickness and definition to their single coil pickups. However, it is not the highly adjustable “Swiss army knife” style pedal that the Thick Air is because it just gives you the one option plus a boost and the ability to bypass it with a finger switch.
I am using the Thick Air on my main rig, and personally find it more useful than the ADA, but have also made a spot for the ADA on my upstairs rig in the front of the chain so I can use it to boost my EF and thicken up my Strat tones.
Ver cool pedal indeed

Blacklodgebob wrote: ↑Mon Mar 22, 2021 3:29 pm Buy one and post your thoughts - otherwise its just pointless talking to a rolling wheel.

Ok so I bought one and here are my thoughts. The Thick Air and the ADA are two very different types of pedals. It is impossible for one to replace the other or for one to be better than the other because they are different in both form and factor.
The ADA is a pickup booster meant to go at the beginning of your chain that also has a clean boost function. The effect is extremely subtle and very hard to detect - but it does enhance, or slightly thicken the tone of your pickups.
The Thick Air is a completely adjustable tone enhancer, sound shaper preamp type pedal that works best (IMHO) at the end of the chain, after OD and before reverb etc. it is highly adjustable and adds tone and color to the signal on a very definitive and specific way (it gives you a “sound”) - it doesn’t simply boost the tone of your pickups.

In fact, since they each play such different roles I have found a spot for both of them on my board after much experimentation. They actually okay quite well together. But they are not interchangeable by any means IMHO.

Cheers and thanks for recommending the ADA - I do think it adds something valuable and I really like the boost at subtle settings for enhancing my Microtron tone. 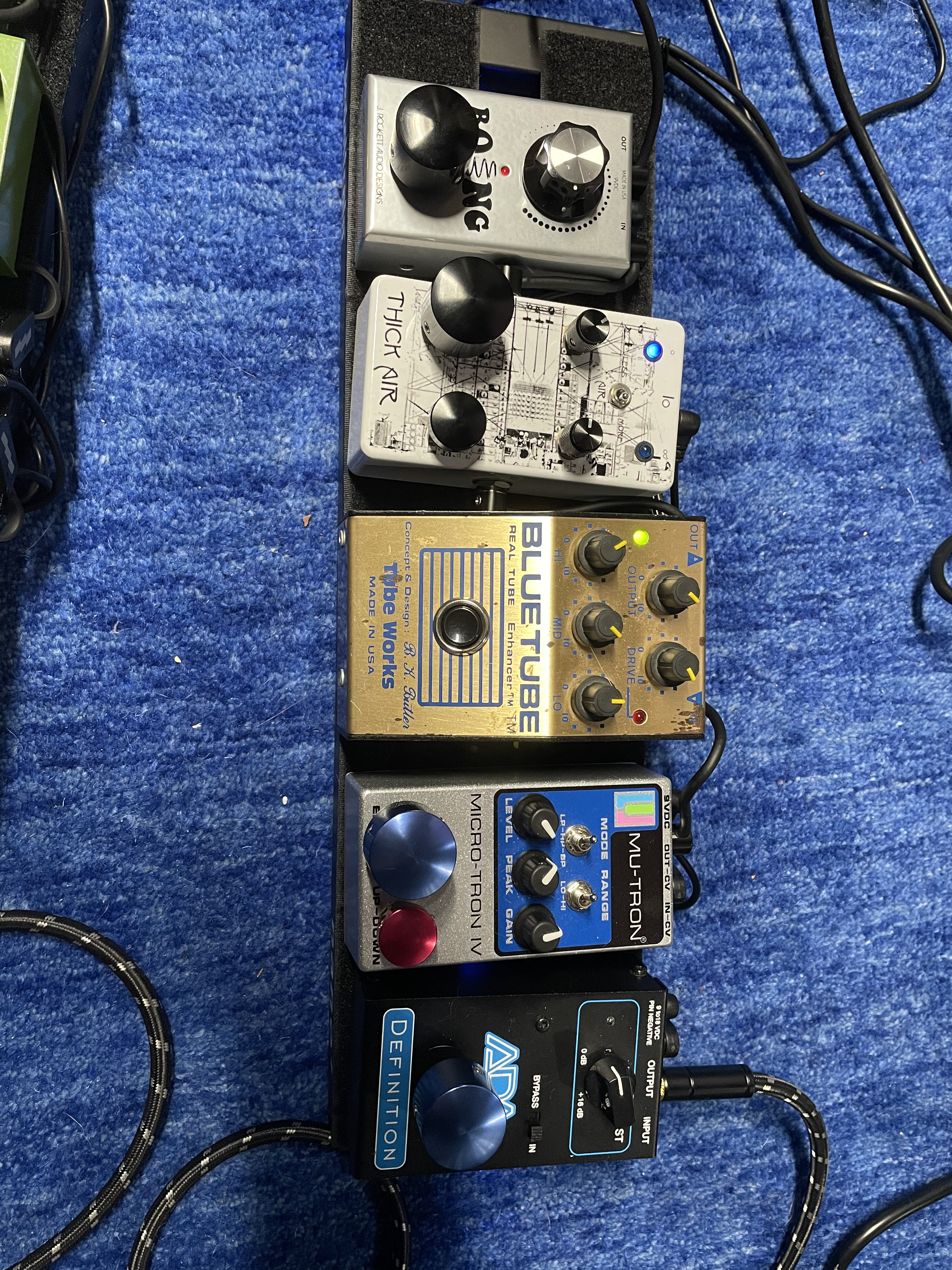 This thing does the clean boost I’ve been trying overdrives and other things to thicken the guitars tone without muddy distortion. Just a bigger sound with a slight edge. Partially like hitting the ‘loudness’ button on our high school stereos.

I need more time and to use Jerry style guitars... but I’m very stoked.

This thing does the clean boost I’ve been trying overdrives and other things to thicken the guitars tone without muddy distortion. Just a bigger sound with a slight edge. Partially like hitting the ‘loudness’ button on our high school stereos.

I need more time and to use Jerry style guitars... but I’m very stoked.

Nice board! So many ways to use that thing the possibilities are almost endless - over a month in and I’m still trying new things. I like where you have it (last?) in the chain - one setting I like is both channels on the TA at 9 o clock and Earth Drive adjusted to taste (great for Jerry leads at lower volume). I also like having the first channel on after the Microtron)
So many possibilities...enjoy!!! (I know I am)